Godzilla Defense Force APK is a tower defence game developed by Nexon and Neopl Studio 42, inspired by the giant monsters of the Godzilla series – a film series about fictional giant monsters in Japan.

Table of contents
About Godzilla Defense Force
They were licensed by Toho about the content and images of these monsters. More specifically, this game was released a few days before the movie Godzilla: King of the Monsters was scened worldwide. So this is a great suggestion if you are a Godzilla fan and want to learn more about this movie.

gameplay
A nuclear test has caused a major disaster for the Earth. Giant monsters that rise underground, threatening human life. According to the game’s information, there are over 100 different species of monsters that have appeared in 31 movies, starting with the first Godzilla film in 1954. London, Tokyo or Sydney are in need of your help. Join forces to protect the Earth, rescue major cities in the world.

Gameplay
Godzilla Defense Force’s gameplay is a combination of card game and a tower defence game. The player’s mission is to design defence systems for cities, then preventing the attacks of Kaiju species. These legendary monsters often attack from the sea. Put high-altitude artillery, tanks, military bases, nuclear bombs, … in convenient locations, to help maximize damage to them.

It sounds easy, but in fact, the Kaiju are the most powerful creatures on Earth, they are not easily defeated by human weapons such as tanks or fighters. And you only have 30 seconds to beat them (sounds ridiculous).

Despite the great strength, Kaiju species are not without weaknesses. In each attack, Kaiju’s weaknesses will appear. You can then concentrate your firepower to deal more damage.

Special allies
In the Godzilla universe, legendary monsters are divided into two categories. Some find ways to destroy the world so that their species can proliferate, others are born with the purpose of preventing these species. Therefore, some species like Godzilla or Jet Jaguar become the great ally of humanity in the survival war. They will help you fight against destructive monsters, including Mothra, Rodan, and the three-headed dragon Ghidorah and many other species.

By taking down a monster, you will get the card of that monster and you can use the card at the next level. Remember that you can only use this card during critical times because you have only one use.

In addition, Godzilla Defense Force also has a number of other card types to help you increase your strength or increase your defence. Upgrading Godzilla is a great solution if you encounter a Kaiju with destroying power.

Rescue innocent people
Of course. When a Kaiju appears in the human world, it means that Earth’s apocalypse has arrived. The world becomes dark, buildings are destroyed, volcanoes are active, … A lot of people are in danger. You can see them screaming through the windows of buildings. Not only fighting Kaiju but protecting innocent people is also an important task for you in Godzilla Defense Force. Touch the building where they are trapped and take them to safety.

Graphics
Godzilla Defense Force has quite good graphics when compared to other tower defence games. The cities in the game are simulated to resemble reality. Kaiju appear on the coast or in the sky with huge sizes. After each stage, you will be informed of the situation by a beautiful assistant with a cute voice. 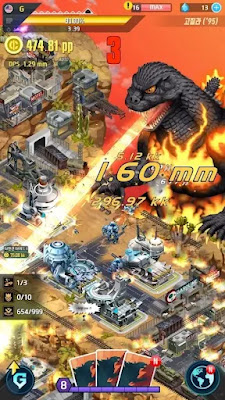 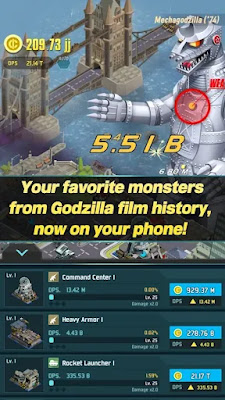