Introduce about Pocket Ants
Pocket Ants is a strategy game from publisher Ariel Software. However, instead of setting up an effective strategy to command an army like in other games, you will become a manager, helping the queen build a base with your subjects. It can be said that the appearance of Pocket Ants is a bright spot in today’s saturated strategy game. With new and attractive gameplay, Pocket Ants has attracted more than 1 million hits from all over the world. Currently, this game is completely free to download.

Gameplay of Pocket Ants
As a manager in Pocket Ants, your task is to manage your subjects to build a strong base. You need to send worker-ants out of the nest to collect resources, build rooms in the nest. Increase the number of soldiers and workers by raising queens. In this way, you can build a mighty army of soldiers capable of fighting enemies and invading creatures.

To upgrade chambers or perform other quests will consume seeds. Regularly send teams of workers to collect seeds outside the nest and store them in the seed warehouse.

Pocket Ants have a special aphid from which you can collect honey. After building the nest, leading the army to capture the fire ant’s base. One trick that will help you win quickly is to defeat the red ant queen first. Without a leader, the army of red ants will lose direction and lose quickly. Then you will protect the aphid convoy and bring them back to the safety nest, then use them to create honey.

Collect Food – the main food to help the queen survive to produce soldiers and citizens. You can also use Leaves to produce food and upgrade many other things. Do not forget to build and upgrade the slave chamber because this is a place to store resources.

Defeat the creatures outside to collect more Body Parts and use them for upgrades.

Honeydew is considered a form of currency in Pocket Ants. You can use them to exchange items in the store. There are many types of items for you to choose from. For example, reducing egg hatching time, increasing working speed for worker ants, increasing chances of the successful fusion of organisms, …

Build your ant army
To be able to win in Pocket Ants, you need an army of powerful ants and good combat. Besides the creatures outside the nest, your army of ants will have to face the ant nests controlled by other players. Initially press the button on the bottom left corner of the screen to become the leader, the other ants will follow you wherever you go. 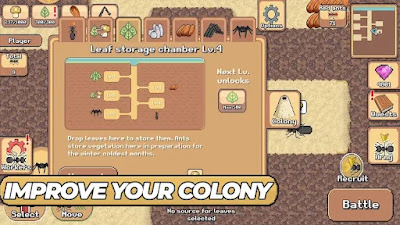