Introduce about Art of War: Legions
Strategy games have long been popular. It attracts a large number of players because of the attractive gameplay, not too loud and complex as the role-playing genre but can still keep them away from the screen for hours. Art of War: Legions is consistent with the things I mentioned above. Specifically, we will explore in the next sections of the article.

Gameplay
When playing Art of War: Legions, you will become a commander, lead your army to the battlefield and defeat the enemy forces. At each level, the number of warriors and units you face will vary.

Of course, the enemy will get stronger over time, so you need to prepare carefully for tactics, units and arrange them in a reasonable position before the battle starts. I usually leave the archers at the back, because they can attack from afar, while the infantry, Common Troop and hero units will block the opponent’s move.

In the beginning, the battlefield was small, with only a maximum of nine units (including Troop, not including heroes). But as the level gets higher, it will expand so you can build up more forces.

Hero collection
Although it is a strategy game, if your forces are too weak, you don’t have a chance to win. Therefore, the presence of the heroes is to complement this. They are very strong and have special personal skills. You can touch the icons at the bottom of the screen to use after each waiting period to recover.

Where can you find a hero? Stay in the card box or hero box and you have to buy them with Gems.

What kind of hero is there? There are three types: rare, epic and legendary. At the same time, this is also the division of power and rarity when opening the card. Legendary heroes are the strongest. They have superior stats, but you’ll have to spend a lot of cards to get them.

What about power? Not only military units, but the heroes also contributed to the tactics of this game. For example, Bull Demon King – Minotaur, he has superior offensive stats, capable of increasing defenses for all soldiers. And Little of Life – Green can increase HP for allies during the battle. Depending on the strategy you choose, choose a suitable hero to get a higher chance of winning.

Upgrade
Troop and hero units can be upgraded. However, depending on the tactics, they have completely different uses. The heroes have a separate upgrade interface, which helps them increase the level of influence of individual skills, including defense and attack stats. Soldier units can only be upgraded when you are in the process of preparing for battle. You will have to buy units, then put them together. In the worst case, if an army is defeated, you will have nothing, you have to buy and upgrade again from level 1. But you can do this more quickly with the Barracks feature. They will unite all the units of the same rank together. Both processes cost Coins and Gems.

Task system
Art of War: Legions has a bonus quest system. Each time you complete, you will receive coins and gems. They are used to recruit unit in battles or buy cards in the store for a chance to receive heroes. The system unlocks at level 15. But at the moment, there are only two parts “Snow adventure” and “Desert treasure hunt”. Each of them has five challenges, you can overcome them all and come back to do more times.

Besides, in daily tasks, you will have to score achievements through battles to complete. For example, destroy 50 archers, use the hero’s skills 10 times, upgrade units or complete challenges in the arena. 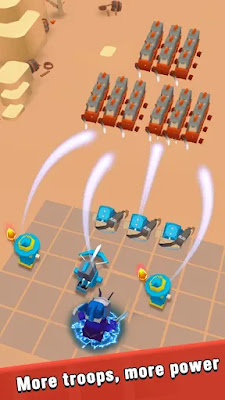 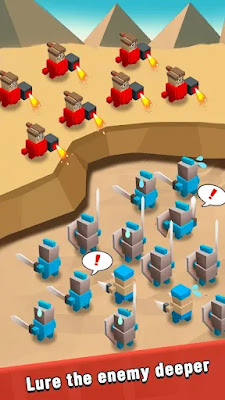