Flight Pilot Simulator puts you in the role of an excellent pilot with capable of “well handling” of all types of aircraft, from airliners to military aircraft, even strike fighters. Flying a plane, you not only enjoy the surrounding space for fun like some common airplane simulation games but also to perform your missions.

What makes Flight Pilot Simulator so different?
The first element is the list of missions which are difficult, varied, and unpredictable and you have to do all of them with no other options. Of course, with a variety of aircraft types mentioned above, your work will not be easy but too much at all different levels. You will have to control your aircraft to do some assigned missions such as firefighting on high mountains, rescuing hostages, crossing obstacles to penetrate a certain military area…

The second element is the unique 3D graphics in Flight Pilot Simulator. It is known that the design of 3D simulation has consumed the production team a lot of money and efforts in the production of plenty of elements: from the plane, operating method, starting and landing method, operation method, and finally the surrounding view on the road and at the location of the mission. I must say everything either large or small is vivid and authentic and extremely detailed. Up to now, it can be said that the publisher has done what they want from day one: giving the player the most authentic and professional experience with the simplest gameplay that a 4-year-old child can proficiently play.

The Pilot will pull the bar on the right side of the screen in the direction from bottom to top to start the plane from the runway. After you have enough acceleration, you tilt the screen up for the plane to take off. While flying, you can freely tilt the phone to the left and right to navigate the flight. Besides, you can lift and lower the phone to adjust the altitude of the plane.

You can do the same when landing to perform a mission. You will fly the aircraft to the correct position on the guide map then land slowly to the right place and start your mission. Until the mission is completed, the aircraft will take off again. 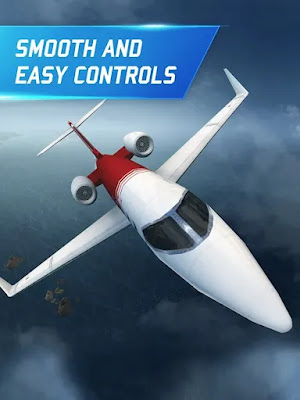