Introduce about Extreme SUV Driving Simulator
The most realistic and fierce off-road racing game on mobile.

The vehicle lineup in Extreme SUV Driving Simulator is very fierce. In the beginning, you will go to “Car collections” to choose a car. There are all kinds of off-road vehicles here, from colors to shapes and specialized features. At first, you only have 4-5 options. But after slowly accumulating points and then unlocking new cars, the fun will be really pushed to the climax.

After choosing the car, you continue to go to “Customize” to customize your car. With a few basic color selection steps, you will be ready for a challenging racetrack. Let’s get in!

You don’t have to compete with many other players but yourself with a series of terrain obstacles
Extreme SUV Driving Simulator is not a pure racing game like you have ever thought. It’s not here for you to just sit behind the steering wheel racing with cars on the road without thinking much or taking any breaks. You will constantly receive many small missions on the road such as stopping to pick up the goods and then deliver them to a stop and unloading them; or not having a choice but climbing over a high mountain peak in the sky. In each mission like that, all need to be done within a limited time allowed.

The operations in the game are not too complicated. On the left is the steering wheel; on the right are the indicators on the car, gas pedals, and brake pedals. You need to combine your skills well on steering, acceleration, deceleration, engine power reduction, brake pedal to conquer difficult terrain, from riverside, hillside, or uphill and downhill roads covered with slippery snow. The 3D world in Extreme SUV Driving Simulator is extremely open. Each scene can include many different roads, in which there are full of dangers waiting for a skillful driver who is you.

And since this is a terrain race, what you need to conquer is not only zigzagging tracks but so many undulating, winding points that force you to drive like climbing. You do not need to drive at super high speed to win. Winning or losing is decided by the smooth controls over the car, and decisions on where to accelerate, where to slow down, where to reverse to move forward… Just with a little mistake, your car can skid without brakes, and you will lose.

10/10 points for physics mechanism
A highlight of Extreme SUV Driving Simulator is the way it reproduces the physics that is very close to real life. If the car carries heavy goods behind, the blocks of goods will vibrate and then fly out of the car when you roll and turn too fast. If the car runs on the narrow mountainside, there will be a series of large and small rocks falling out of the way, making you nervous and sweating. And when sliding, the wheels are almost uncontrollable, it will spin around with a very scary creaking sound…

Everything in real life you’ve heard, seen, and known is shown exactly in Extreme SUV Driving Simulator. Damage is always accompanied by errors on the track, and large damage will make your car less accurate in the later stages. It is this great realistic simulation that has helped this game always be at the top of the most popular off-road racing games on mobile phones.

The game also gives you multi comfortable viewing angles which are randomly selected from the system’s AI depending on the situation unfolding on the road. So, you will never get bored because everything keeps changing, giving you different views and feelings. Moreover, you will see the scene become much larger, true to the open-world concept that the game maker introduced from the beginning.

How to control?
You are also free to control in two different ways on mobile, one is by the steering wheel, the other is by the emulator arrow keys, both located in the left corner of the screen. You can choose whatever style you like. Driving with the steering wheel will be easier to smoothly control in more detail the direction of the car, but difficult to get used to. Meanwhile, driving with the emulator arrow keys is less detailed in control but easy to get used to. I usually go back and forth between the two. I select the steering wheel when traveling through difficult terrain and tight spaces and select the arrow keys when traveling on flat and wide roads. 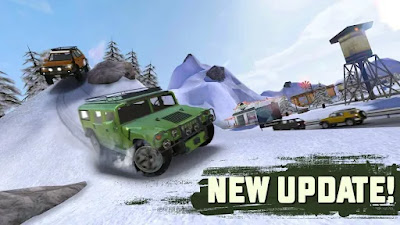