Hide and Seek is a fun game loved by most children. According to each country, this game also has many different variations. Object Hunt is a product of Kwalee, a famous UK game publisher. This game was released not long ago, but it quickly received the attention of the majority of players thanks to its extremely fun and dramatic gameplay.

A new hide and seek game for Android
Usually, the game of hide-and-seek involves one seeker and many others looking for hiding places. And of course, no one can change their appearance to hide. But in Object Hunt, the gameplay has been refreshingly interesting. The one who hiding will randomly turn into arbitrary objects in the house. They would then move to the appropriate place for the object so that the seeker wouldn’t be able to detect it

A sofa next to the table, nothing unusual right? But who knows, it might also be some mischievous player. Starting the game, the system will randomly spin to select a hunter. The rest will turn into any object and move to where they want. This feature makes the game even more interesting, avoiding the situation of players choosing only one role throughout matches.

So, what is the rule of Object Hunt?
When you are hiding
As mentioned, you turn into any object and find yourself a place to hide. To hide safely, you need to find a place that matches what you are turning into. For example, if you are a chair, you need to move closer to the table, or if it’s the toilet, you need to be in the toilet room. If you were a chair, and you moved to the bathroom, surely a noob player like me could see something unusual.

If you are a hunter, what will you do?
When you go looking for someone else, you are called a hunter. What you need to do is find all the people hiding, hiding under the objects. You only have a limited amount of time to find them. If time is up, you still haven’t found all the escapades, you are the loser. The outcome of the game is entirely up to your subtlety and judgment. There will also be people hiding in the right places, so whether you can find them or not depends a lot on experience and a little luck.

Unlock new skins for characters
During the game, you will gradually unlock new skins. They could be new hunters with extremely funny looks. Initially a cute pink pig and then a duck, chicken, dog or any animal … New characters not only have new looks, but they also have faster movement speed. Thanks to that, you can quickly catch those who are hiding. 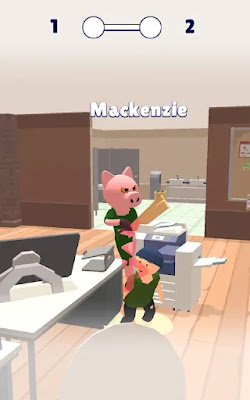 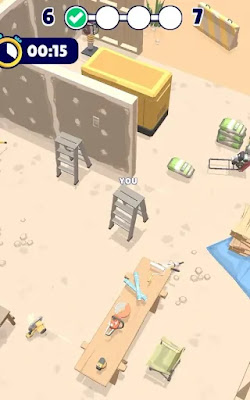