Introduce about Bomber Friends
If your childhood was associated with arcade games, you probably know the legendary bomber game Bomberman. With simple gameplay, easy to understand but extremely interesting, the game produced in 1983 easily created a storm at that time. Why did I mention Bomberman? Because the game today I introduce to you, Bomber Friends is considered the most successful version of Bomberman for Android devices.

Bomber Friends is the most popular Bomberman game on Google Play. The game of Hyperkani has reached more than 50 million downloads on Google Play, and that number is constantly increasing. When playing console, you needed four friends to play Bomberman. If you play alone, your only option is to play with AI. With Bomber Friends, the game allows you to play with online players around the globe. You can invite your friends, team up and fight together with other players.

Storyline
The story begins in a small town, where our hero Bomber lives a peaceful life with friends and family. But those peaceful days did not last long. One day, orcs attacked the village. They destroy everything, kidnap the entire villagers. His friends were taken to a remote place, the land divided into many small islands including Grassland, Desert, Cursed Castle, Winter Valley. You will help Bomber to adventure through strange lands, fight monsters and rescue his friends.

Gameplay
The gameplay of Bomber Friends is not much different when compared to the classic Bomberman games. You control the character moving in a maze and placing bombs to break bricks. You have a chance to get some upgrade items when you break a brick. Some brick cannot be destroyed, you should use this to “trap” the enemy in a prison with bombs and brick walls.

You use the joystick on the left to control the character moves, the key on the right helps you place the bomb. Controls are not complicated. The important thing is that you need to find tactics to defeat the entire opponent. In my opinion, you should focus on collecting lots of items in the early stages of the match. When you have more bombs, the bombs have a wider range, you have an advantage over your opponents.

Graphics
In order to bring players the experience of the classic Bomberman series, Bomber Friends does not have too much difference if you have played the original games on the console. The game owns classic 2D graphics with beautiful effects. Besides, the sound is also quite well.

Items
When breaking a brick, you have a chance to get some of the following items:

Flame: Increases the range of the bomb.
Shoes: Help you run faster.
Bomb: Increase the maximum number of bombs you can place.
Shield: Helps you immortalize for 5 seconds.
Skull: This is a trap, making you go slower.
Modes
Classic mode: The system will match you and three other players into a match. Destroy all opponents to win.

Adventure mode: Find the key to open the secret gate, help you advance to the next level. Each level has a number of monsters that hinder your journey, you can defeat them, or ignore them. Help Bomber on his journey to find his friends and family. 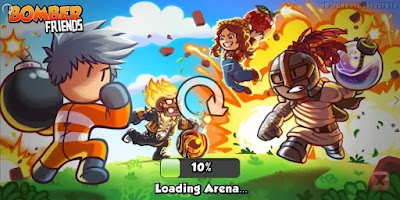