Plot
It all happened a long time ago. According to Greek mythology, a young man named Icarus made himself a pair of wings from feathers and beeswax because he wanted to fly high and explore everything around him. With wings, he flew to the clouds and come to a mysterious kingdom between the floors of heaven. He had the opportunity to meet Nyx, a fairy who was so beautiful, intelligent, graceful with fragile wings.

At first, the two quickly became close friends. But since one was a mortal and the other was a fairy, they could only meet in the morning. When night fell, both the mysterious kingdom between the heavens and Nyx would disappear without a trace.

Both were then still in peace, happy with the fate that God had given them. Until one day, a terrible disaster came to the Earth. The sun suddenly became violent, shining bright sunlight and releasing a terrible heat that burned everything and all species on Earth. Icarus wanted to meet Nyx, but when he tried to fly, his wings were melted by the heat of the sun, and he fell to the ground countless times. Day after day, because of not seeing her soulmate coming, Nyx decided to defy the rules of Olympus and flew down to the Earth to find Icarus. Nyx’s adventure began here.

Despite carrying fairy bones, when she arrived on Earth, Nyx was greatly damaged by the terrible heat of the sun, and her energy was affected somehow. Nyx could only flap her wings up to 5 ​​times at one turn, and if she hit any point on the ground that had become the scorching hot sand desert of the Earth, she would disappear forever. Later, in addition to the available flying and pushing skills, the little fairy Nyx, when collecting many items and passing a few levels, would have many other skills such as moving objects in many directions (Telekinesis), control the wind direction (The Power of Wind), create little sunshine with effect as a thunder (Little Ray of sunshine) …

When the speed isn’t everything
On your adventure to find a friend, as Nyx, you must go through many obstacles, difficulties, traps, and a series of difficult puzzles. The skillful combination of existing skills and sharp judgment will help you complete the scene. Some challenges are overcome not by the strength but by the logical thinking of the player. For example, there is a scene where Nyx will have to find a way through a series of hot eruptions from underground. These eruptions are so high that flying over them is impossible. So, you will need to use the skill of moving objects to push a large wooden crate to cover the sandblasting hole above the ground, then fly through and continue to push another crate to cover the next hole.

It looks easy, and the pace looks quite slow, but to really go into the adventure and play for a long time, you must not only go right and do it right, but also must combine a lot of factors such as logical thinking, judgment, quick control, and keen observation. When a road appears in front of you, your first work is not to rush to finish it but to look carefully around for any traps and objects and then complete it. Each item that appears in NyxQuest: Kindred Spirits is for a certain purpose which is beneficial and will help you escape the pitfalls ahead. Just observe carefully and judge a little, everything will be much more favorable.

Graphics and sound
About the sound, just listening to the first tunes played is enough for you to imagine a perfect scene about to be seen. A little hum, a little wail, and a little sadness predict countless difficulties and a touching story of friendship. Sound effects also do their job quite well in describing Nyx’s encounters with vultures, giant snakes, and pitfalls in the game.

Not to mention the visuals. Going into the game, you will understand why NyxQuest: Kindred Spirits, since its launch, has always been at the top of the favorite adventure games on Google Play. The scenery and character creation in NyxQuest: Kindred Spirits are extremely attractive. All are presented in an earthy orange tone as the main theme, which is true to the spirit of the Earth being burned by the heat of the Sun. 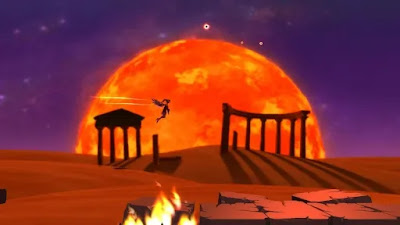 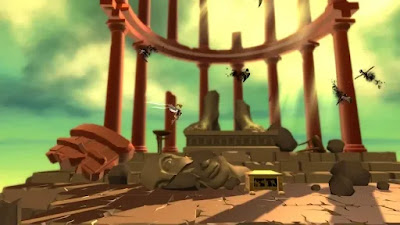