The city-building simulation games often give players the most authentic experience in managing their dream city. Many games also apply stunning 3D graphics, along with a variety of gameplay so players can enjoy managing their city anytime, anywhere. And for the Android platform, a series of construction and management simulation games are called City Island. In this article, it will refer to the series’ 5th game, City Island 5, with improved graphics featuring many novel architectural patterns from around the world.

BUILD YOUR FIST CITY AND EXPAND IT
If the player wants the city to go into service, it needs residents and other essential functions, such as electricity, food, water, and many other items. Players will begin building the first residential neighborhood, and they will begin to generate revenue for a while. Next is the construction of functional buildings, which provide the essentials for the entire city. And finally, buildings that provide services, like jobs, transportation, and so much more, all the amenities a city needs. The player can build many of the same buildings, but they need to prioritize the diversity of the building, such as the functions and services they bring to the city.

COMPLETE QUEST AND LEVEL UP
In City Island 5, the mission system is the core function, and also a way to guide the player with all functions or gameplay of the game. Depending on the player’s level, the mission system will vary, and there are requirements that players can respond to immediately. The mission system will give players many attractive rewards, such as EXP, buildings, and currency of the game. As the player levels up, the game unlocks new things, like expanding the area of ​​the city, unlocking new functions, improving city performance, and appearing new types of buildings. When players reach a certain level, they will unlock new islands to start building more cities.

VARIOUS BUILDING AND CONSTRUCTION
A city becomes more diverse thanks to the creativity of the mayor, so players must make the city more beautiful with all the available buildings. The building system is divided into many, even varied, and players will need a versatile filter to categorize all the content. Players can build roads and multiple areas, such as leisure, residential, industrial, business, etc. Of course, the player can move all the existing houses, even change the direction of its facade to make the city more vivid. As you level up, the game will unlock new content, and it also has plenty of great performance for the city to thrive.

UNLOCK OTHER ISLANDS
The City Island series will feature multiple islands in each of its games, and the 5th game will be no exception. The characteristics of each island are different, even varied in climate, environment, weather, and topography. Depending on the current island type, players will build appropriate buildings, and even each island will automatically classify separate buildings. The player can freely move between each island thanks to a special vehicle, and construct new structures during the absence. Of course, each island will provide players with its mainstream service, and players can take advantage of them effectively and make the islands thrive.

A WELL-REFINED GRAPHICS AND VISUAL EFFECTS
Compared to the previous games, City Island 5 will have well-refined graphics, even significant improvements for players to enjoy. The game will update more new types of buildings, with many different cultures, for the player’s city to be more diverse. The game will improve the graphics effects and even make the game more enjoyable, the same with the sound system. Besides, the content is meticulously designed in full detail, and even the NPCs will become more authentic, making the game more different and fascinating than the previous games.

DISCOVER SECRETS ON ISLANDS
Most of the islands of City Island 5 are deserted and show no signs of civilization, so the game will make them more interesting by adding secrets and treasure for players to find. Each city hides its treasures in random locations, and the player can find them if the size of the city expands after each level up. Those treasure pieces will give players many attractive rewards, including ancient structures to build for cities.

City Island 5 is the highest-rated game in the series, and is also the most entertaining game thanks to its improved gameplay, along with a well-tuned graphics. The game will constantly update many new buildings, even simulating world-famous buildings, which makes the player’s city continually changing, even improving the city to a new level. This game will be a perfect choice for those who love building simulation or city management gameplay. 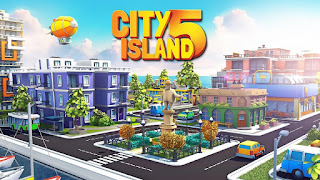 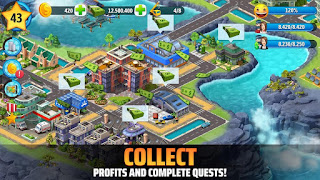 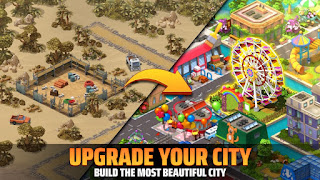