As a child, is there any more joy than having fun with lots of toys huh? And the army’s toys, including soldiers, and tanks made of green plastic seem to be too familiar to our childhood. Today, we will travel time to that childhood, and meet these green soldiers again with the game Army Men Strike. A brief introduction, Army Men Strike is a strategy game developed by the company FightClub. With a strong inspiration for the kids’ childhood toys, what experience will FightClub bring to us?

Real-Time Strategy Simulator
Join the Army Men Strike; the player will become a general, tasked with building his army and fighting against other enemies. In the beginning, you are provided with an area to be a base, and some assets and materials to develop. Build up the first barracks, to summon more soldiers, and perform the first combat missions. Around your base are other enemy bases that are always available to attack. When you have a stronger force, you should choose the right opponents to attack and plunder their properties. Gradually, you will have more assets, and also when you promote the development of your army. The game offers many types of troops, and war vehicles including units of infantry soldiers, artillery, fighters, tanks, missiles,… At the same time, provide you with many types of defense and weapon construction. Please select the corresponding function to select the building to start building.

Play like a kid, Fight like a man!
For each game, you just need to open the map, then select the base you want to attack, the system will take you to the enemy’s barracks. Here, you will show your army units, then touch buildings, or enemy soldiers to attack. Make sure your forces are strong enough to win. The system will reward you with money, and you will also steal resources from the enemy base. The first time you join this game, you will encounter challenges quite easily. But later, the enemy will gradually become stronger, have a stronger base will make you feel tough. At that time, use all the resources and gold you have, to upgrade buildings in the base, upgrade military units and assemble bombers. This will make your force bigger and healthier, but you also need to study the attack strategy most effectively, causing the enemy to lose, but you will spend less effort.

Graphics
Army Men Strike is built on a beautiful 2.5D graphics platform. All designs from characters, backgrounds to war vehicles are very compact in your screen. With a top-down view, you’ll cover the situation in a large area. The bases were built quite nicely, including protection works, research works to areas of recruiting soldiers and production of war vehicles. Concerning color, Army Men Strike is not too flashy in general, but when fighting, the scene has a dark color, mainly cold tones.

In addition, the sound is also quite good, is a combination of funny background music, and the sound of gunshots, bullets, voices of commanders when ordering. Perhaps, the criteria that Army Men Strike has are enough for experienced strategy game lovers. Download this game and play to discover more new features. 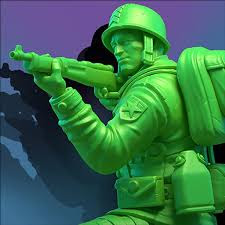 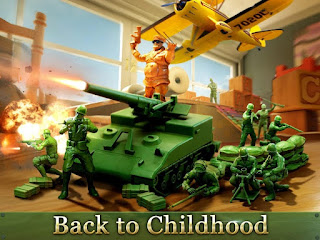 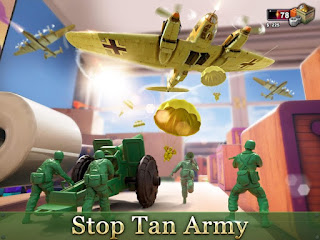